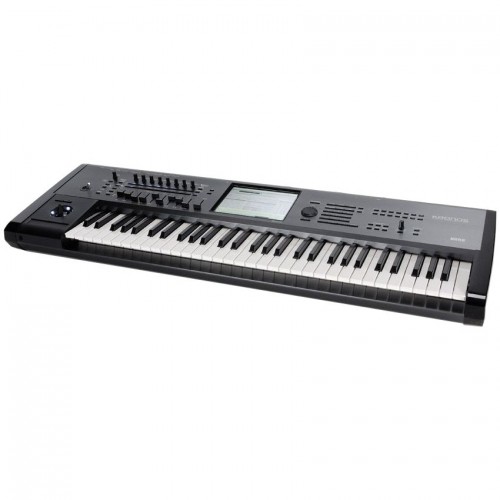 The new Kronos is more or less an expanded Oasys, with all of its original sound engines onboard, plus some new ones. Though the Kronos' screen is smaller, there's no CD drive, no ring LEDs round the dials and fewer outputs, there are many welcome additions, expanding on the Oasys' already impressive architecture.

The Kronos comes in three versions - a 61-note synth action keyboard and 73-note and 88-note weighted versions using the RH3 keybed from the SV1.

For this review, we're using the 61-note version, which feels surprisingly nice to play with its squared-off piano-like keys and sufﬁciently deep key travel for piano playing. It would also be nice if Korg made a Kronos with a semi-weighted waterfall keybed such as the Nord Electro 3.

Looks-wise it's classy yet understated, with a brushed black metal panel and glossy plastic end caps with white panel labelling. However, we fear the shiny black end caps will scratch easily and look shabby after a few gigs. Rubberised plastic would have been much more practical.

The dials and sliders feel sturdy but they do have a bit of sideward play.