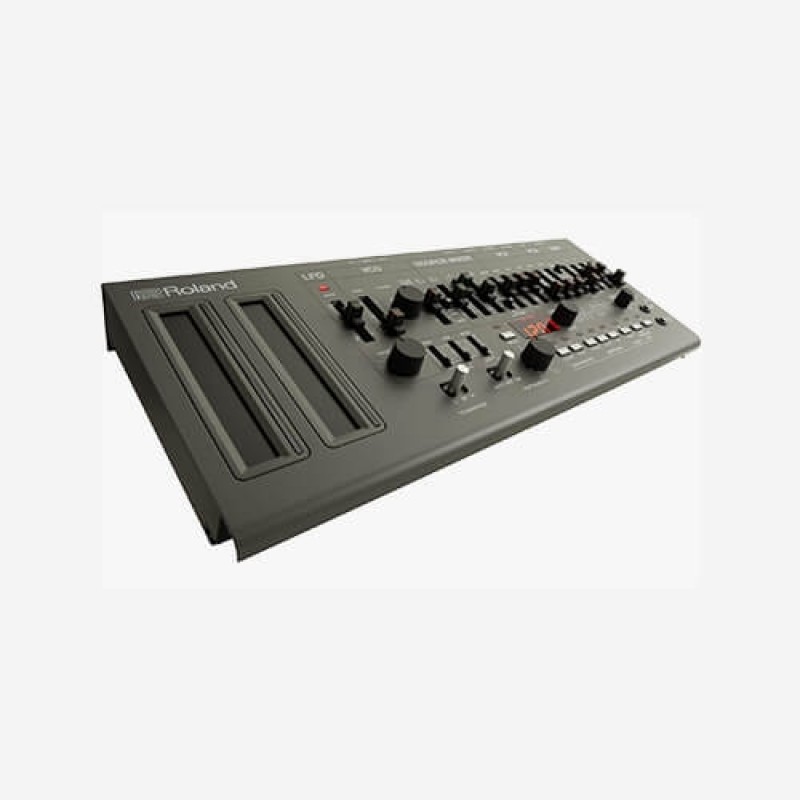 Roland Synthesizer SH-01AFOUR TIMES THE SOUNDS IN A FRACTION OF THE SIZEThe Roland SH-01A is a meticulous reproduction of the iconic Roland SH-101, one of the most popular classic synthesizers of all time. Our Analog Circuit ..

FOUR TIMES THE SOUNDS IN A FRACTION OF THE SIZE

The Roland SH-01A is a meticulous reproduction of the iconic Roland SH-101, one of the most popular classic synthesizers of all time. Our Analog Circuit Behavior (ACB) technology reproduces the SH-101’s legendary sounds by faithfully recreating the actual behavior of the original analog circuits, right down to the fine details and odd quirks that have endeared the synth to musicians and producers for decades. The SH-01A builds on the great sounds and creative immediacy of the original, now in the popular Roland Boutique format—offering exciting new polyphonic capabilities, inspiring new performance features, and a level of authenticity that could only come from Roland.

The now-legendary SH-101 was a seemingly simple monophonic synthesizer launched in 1982. Unlike more complex synthesizers available at the time, the SH-101 quickly became popular for its characteristic tone and simple one-VCO → one-VCF → one-VCA → one-LFO structure. A legion of artists found it quick to program and adept at bright edgy tones and exciting sound effects. Its bass sounds are universally revered, and somehow any sound it produces always just fits perfectly in a mix.

More than thirty years later, the SH-101’s hallmark sounds continue to be sought after by electronic artists the world over. It’s a staple of vintage synth collectors and well-equipped, world-class studios, and now returns as the inspiration for the SH-01A.

A is for Authentic

Original SH-101s are becoming increasingly rare, making them ever more expensive on the used market. Because of this, many have resorted to sample packs, hardware knockoffs, or software plug-ins loosely inspired by the SH-101. The SH-01A accurately recreates what makes the original so special, and the interface, while more compact, is 100% authentic.

The sound is vibrant and alive thanks to our proprietary Analog Circuit Behavior (ACB) technology. We use ACB to carefully recreate all the details and quirks of the original hardware by modeling each analog circuit, right down to the component level. Face-to-face consultation with the original designers and relentless research beyond the original schematics provides meticulously recreated oscillator, filter, and envelope behavior—a perfect foundation to build upon for a new generation of “101” fans.

One of the most creative features of the original SH-101 was its 100-note step sequencer. Press Load, add sequential notes with legato and rests, and press Play. Easy. Designed to inspire through simplicity, the SH-101 sequencer has been the source of countless bass lines and lead melodies on legendary dance tracks. But the limitation of playing one sequence back at a time has been resolved with the SH-01A. Now you can save and access 64 sequence patterns, perfect for any performance situation. Recall any pattern at any time, and use the iconic sequencer to control your modular rig, hardware synthesizers, and software plugins via CV/Gate, MIDI, and USB. Let the SH-01A be the heart of your electronic instrument setup, on stage or in the studio.

Did You Say Polyphonic?

The SH-101 found its power in a huge monophonic voice for a wide variety of sounds. The SH-01A now has four huge voices, allowing for more modes to expand upon the original’s sound palette. On top of the classic Mono mode, you can stack the four voices in Unison mode to add some punch to your bass and lead lines. Chord mode layers any four notes, and can be shifted up and down in semi-tone intervals. Poly mode allows for four notes to be played simultaneously, making the famous monosynth now capable of pads and chords.

The simple design of the SH-101 made patch creation immediate, with sounds quickly forming under the movement of each key and slider. But that inspiring sound could vanish as quickly as it appeared due to its lack of patch memory. The SH-01A adds 64 writeable patches that can serve as presets for different tracks or quick starting points for experimenting with new sound designs, making inspiration only a button press away.The SH-01A takes the original SH-101’s portability and stage prowess to a whole new level. It’s small enough to take just about anywhere, yet ruggedly built with sturdy knobs, metal-shaft sliders, and solid silver buttons like the original. It has several tilt options for easy viewing in various live and studio scenarios, and can serve as a low-latency, portable audio interface. In addition, it has a built-in speaker, and even runs on batteries. And when mounted in the optional K-25m Keyboard Unit, it can be used as a compact, all-in-one synth with 25 velocity-sensitive keys. With all this power and flexibility, you may be most surprised by the SH-01A’s affordable price, which puts the iconic SH-101 mojo within reach of just about anyone.